Opinion Piece - Kieron Cartledge - What Is The Metaverse? 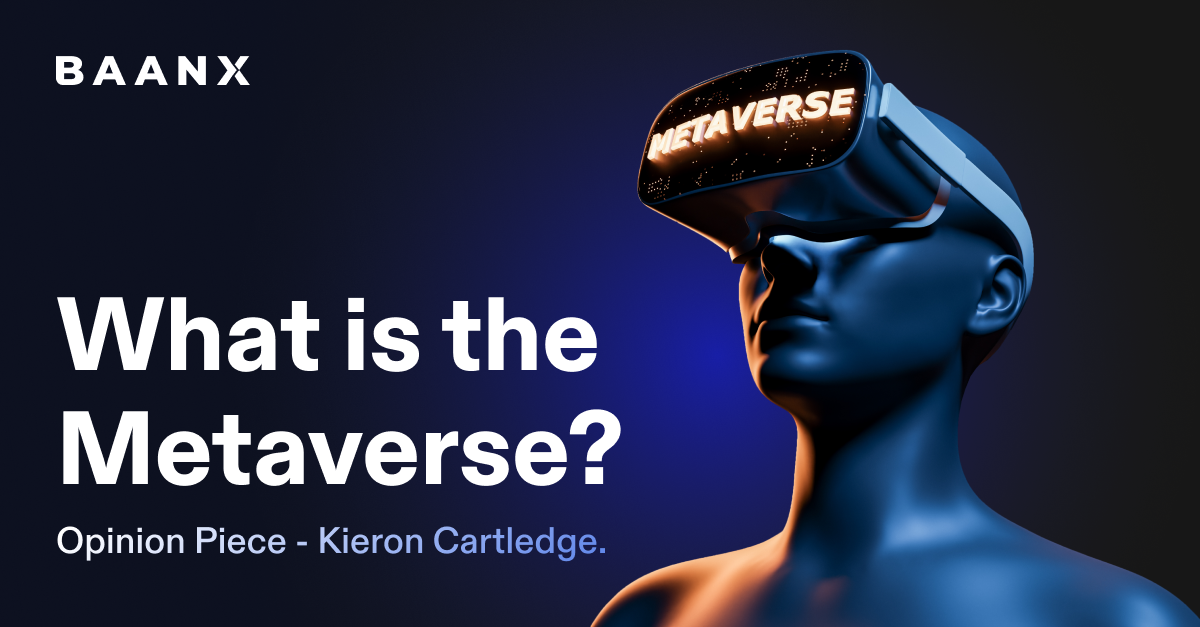 Hey, Kieron Cartledge here, AKA the Global Sales Director from Baanx Group Ltd. In this article, I am going to be discussing gaming in the Metaverse.

As always, I am not trying to sway any opinions here as we all have our own, right? This is what makes each of us individual. Anyway, now I’ve given the disclaimer, let’s jump into it.

What is the Metaverse?

The Metaverse is a series or a single network of 3D virtual worlds, games or interactive environments that focus on social interactions. You could also say that the Metaverse is a mixture of two concepts that have been around for many moons: virtual reality and a digital second life.

For as long as I can remember, techies, enthusiasts, and the average joe for that matter have always dreamed of having a virtual life. We have already witnessed users spend lots of time interacting with other people online, whether that be friends, family, or colleagues in a virtual space. We would spend money there too, such as outfits and objects for our digital avatars.

In recent times, we’ve seen social media giants like Facebook and Instagram, as well as RPG games like World of Warcraft and Runescape, endorsing this concept. So much so, that we’ve even seen them change their business model completely. Take Facebook’s rebrand to “Meta” as an example of this.

Some of the interactive and social parts of the Metaverse are already a part of several video games, as mentioned above. We can look at other examples like Rogue Company, an online shooter game with over 20 million users. An average Rogue Company player spends hundreds of hours in the game and spends hundreds of fiat currency on in-game assets.  Players can also accrue virtual currency, as well as purchase battle passes, packs and skins to customise or level up their avatars.

The Metaverse will work hand in hand with the VR space, in which users can interact with each other and the digital world around them through advanced human-computer interaction (HCI) hardware and software.

Metaverse gaming will have the following key sector focuses:

Play to earn – This will be a crucial part of gaming in the Metaverse. I mean, who wouldn’t want to get paid to play a video game? I know I do! There are games like Clash of Streamers and Axie Infinity, both of which are two P2E’s that follow a linear story and rules. Players can engage in profitable areas of the game.

Games-as-Platforms – The gaming experience will become much more malleable. A player can add to the virtual world, build their own content, construct sub-games within a game, and basically treat the environments as a platform-like space for several activities.

Mixed reality – The Metaverse uses parts of AR and MR to provide a more natural and organic based experience. Being able to game in the Metaverse will 100 % incorporate mixed reality, where users move from group text in AR to an MR board game, then to a full-fledged VR world in a seamless workflow.

Companies I believe are shaping the future of gaming in the Metaverse and are continually pushing the boundaries.

Sandbox – Sandbox is a Metaverse-native game that allows you to play, create, own and govern a virtual space. This is cool, let’s be real! Sandbox’s economy is based on user-generated crypto and NFT assets (see my previous post on NFTs). It also partners with global brands to deliver unique and enriching experiences - a truly digital world!

Epic Games – Epic Games announced an investment of $1 billion to build its own Metaverse centred on gaming. Epic Games is best known for Fortnite, a VR game and event destination bundled into one. With Fortnite’s rise in popularity, artists from around the world have delivered concerts using the game’s Metaverse-like capabilities - I don’t know about you, but I can’t wait to see this and take part myself!

That being said, while I think that the Metaverse is an incredible concept, I do have several concerns that need to be addressed.

Child-appropriate services and controls – We have already several articles out there discussing the issues of young users being harassed. It can be difficult to monitor children’s activity, and we have seen this with every new technology. It can also be hard to tell children apart from adults if there is heavy avatar customisation, making it difficult to determine safe interaction. Games must come with sufficient controls to ensure age-appropriate experiences.

Infrastructure incapability – The massive scale of interoperability required to build a gaming Metaverse is yet to be achieved. Tech giants and patent holders will have to work together, different countries must collaborate on a singular body of Metaverse laws, and our sheer technology has a long way to evolve.

NFT ownership rights – Laws governing the right to own in-game assets are still fuzzy. NFTs won inside a game may not be universally portable, which somewhat defeats the object of a transferable NFT.  Scope of ownership rights must be defined so that users know exactly how they can interact with, trade, and profit off of NFTs.

These are my thoughts, feeling and some facts, but they are not here to tell you what to think or feel. I’m just here to help and share my insights.