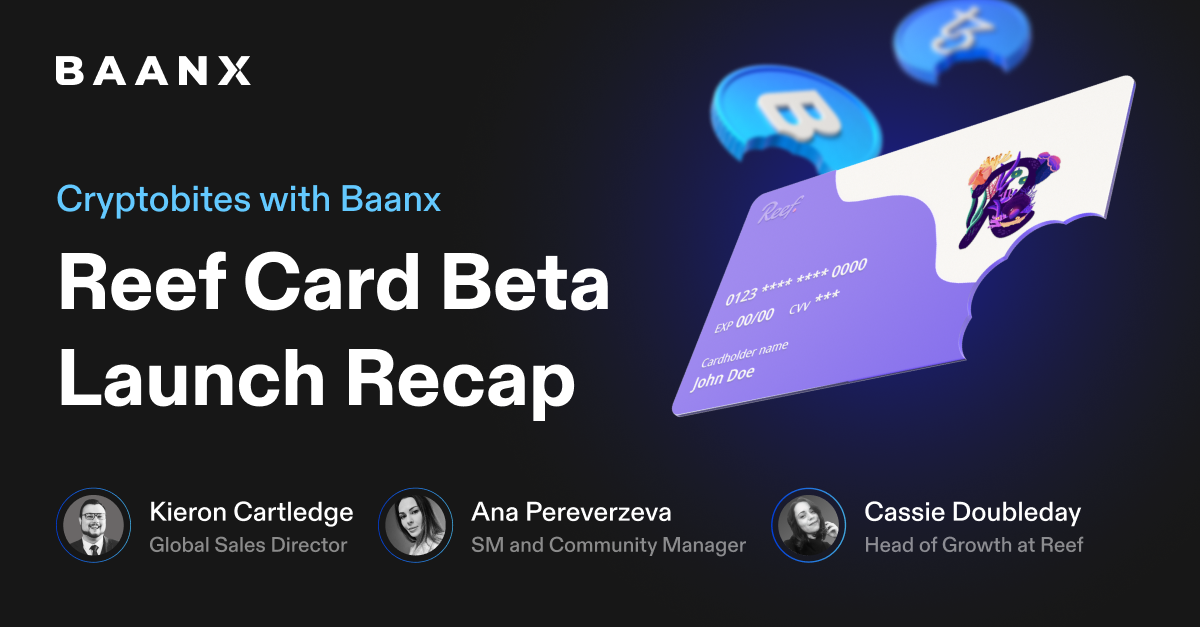 On this week’s episode of Cryptobites with Baanx, we were thrilled to be joined by Cassie Doubleday - the Head of Growth at Reef - to discuss the soft launch for the upcoming Reef card.

We had a great chat with Cassie, in which we discussed the card’s latest news, as well as its functionalities and cardholder benefits.

Don’t worry if you missed it, because we’ve highlighted the most important bits and pieces. Here’s what we talked about:

Absolutely! All of us at Reef are thrilled to finally announce that the long awaited Reef card will be released next week with our early adopters program.

The early adopters program will launch in the UK and Italy. This means anyone who signed up for the waiting list that lives in these countries will be the first to try the Reef card. Watch out for our Twitter for the official announcement!

At this time, we’re not certain which countries will be launching next. We are going to be launching in phases with the most popular EEA countries who signed up for the Reef card. We’re working closely with Baanx, as well as issuers and regulators to get further reach.

For sure. We’re encouraging everyone, regardless of whether they’re in the UK or Italy, to sign up. Simply visit reef.io/card to sign up.

The card will allow the Reef community to instantly liquidate their assets at the time of purchase. This means the user does not need to top up or load a card, like what you get with other solutions out there.

We use the Baanx DWS wallets solution, meaning all you have to do is send your REEF tokens or other crypto into the platform. From there, you can buy, sell, send, exchange and spend it all in one place. When you order a Reef card through the platform, it will instantly generate a digital representation of your physical card, meaning you can start using it for online purchases while you wait for your physical card to arrive.

Not yet! I’m currently travelling around Europe, but one of our Community Managers has been testing the card and using it himself. He went for a lobster dinner and paid with his Reef card! Apart from that, the whole team is really excited for the release of Reef card - we’ve all been waiting for the big release!

All early adopters within the UK and Italy are going to receive an early adopted package that will have information about the card. We really want to make this an open experience, so we’re not putting limits on what we’re looking for. We would also love to see people sharing tweets and other social media posts of them using the card.

Everyone who wants to become an early adopter of the Reef card will have to complete the KYC onboarding process. After you’ve successfully completed it, you’ll be able to order your card.

Right now, we have Binance staking happening, which has been a huge success with our community. We’re also going to be launching our own NFT marketplace, Swqid. We’re also continuing to build the blockchain and partnerships, and we’re focused on helping Web3 devs build dApps on Reef with our Reef dApp Academy.

A special thanks to Cassie Doubleday for joining us for our Twitter Space this week, and thanks again to our loyal listeners for tuning in. Look out for next week’s Twitter Space, where we’ll be hosting our second Monthly Digest episode. We’ll see you there!