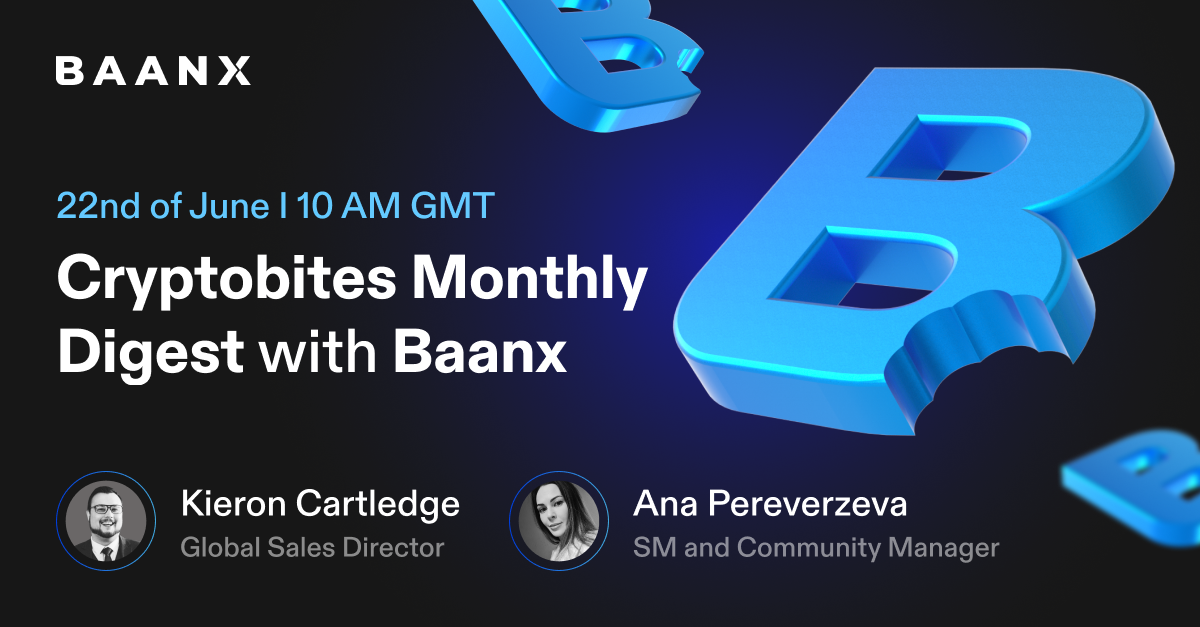 A month has flown by already, meaning it's time for another Cryptobites Monthly Digest!

We’ve had another eventful month in the crypto space. As we enter the bearish market, we’ve seen many platforms, communities and networks trying to navigate this difficult and unpredictable period.

However, despite the gloomy state of the market right now, we’ve also got our own exciting announcement to share with you all.

So with that being said, here’s this month’s roundup:

First, we’ll kick off with some good news. After a long and anticipated wait, we’re excited to announce that Reef will be launching their Reef Card to their UK and Italy customers.

We were also joined last week by Cassie Doubleday, the Head of Growth at Reef, who shared with us her insights into the card and its benefits. If you missed it, check out our recap. You can also listen to a recording of the episode over on our Twitter page.

We’ll be discussing how this has benefited Baanx as a company and how this soft launch has boosted our reputation and credibility in the B2B and B2C markets.

Earlier last week, the Celsius Network announced to its community that it was freezing all withdrawals, swaps and transfers between accounts. This has understandably been quite a blow to the Celsius community, so we’ll be sharing our thoughts into why this has happened, and when we can expect these services to operate again.

It’s no secret that we’re finding ourselves in the middle of the bearish market, with even top cryptocurrencies struggling to maintain their value. Bitcoin has been no exception to this, as we’ve seen the token drop drastically by 70% since hitting its all-time high of around $69k in November.

The bearish market is painful for any crypto investor. We’re not able to offer financial advice, but we will ask our audience to share their strategies for dealing with a bearish market.

However, following the effects of the bearish market, the tables soon turned. The Russian Ruble has since taken its position, pushing Bitcoin down. Could this boil down to investors using Bitcoin as a store-of-value during this uncertainty? Feel free to join the discussion and share your thoughts.

The Tron DAO Reserve (TDR) announced its plans to deploy a further 500 million worth of USDC stablecoins. The move comes as a response to defend the peg of the algorithmic stablecoin USDD.

While USDD is overcollateralized, its value has decreased to 0.96 USD, further away from its 1 USD peg. Tron DAO announced that due to current market conditions, they received another 500 million USDC to defend USDD’s peg. They also claimed that the stablecoin is now overcollateralized by 310%. We’ll be discussing this latest movement, as well as how this impacts Baanx.

Join us this Wednesday!

Join us on our Twitter Space on Wednesday the 22nd at 10AM (GMT). As always, we look forward to seeing you there and hope you’ll join our discussion. We’d love to hear your thoughts and insights!